How to Stop Cyberbullying at your School? 5 Proactive Steps that Actually Work

Contents hide
1 What is Cyberbullying or Online Bullying?
2 How Big is the problem?
3 The Effect of Cyberbullying on Kids
4 What Can your School do to Stop Cyberbullying?
4.1 As a cybersecurity company, we believe that we too have a part to play. That’s why we carefully curated the following 5 effective steps to help schools address cyberbullying (and bullying) from its roots:
5 Spot Cyberbullying before it’s reported using Anti Bullying Tools
5.1 How? GAT Labs offers fantastic tools to Google Workspace Education Domains to address cyberbullying.
6 Teach Students about Cybersecurity and Being Safe Online
7 Understand why Bullies do it
8 Empower Bullied Kids to Cope
9 Teach Kids to Identify Bullying
📖 4 mins read

Cyberbullying, a pandemic that affects almost every school at some point — Let’s get Proactive!

‘Being ‘the different kid’ is no fun. You feel like an outsider. Most kids either stare at you or ignore you. You feel lonely. And worst of all, you get bullied and no one stands up for you!’ — Horrible, right?

For years we’ve been seeing heartbreaking stories in the news. We get all worked up at the time. Rally up behind the bullied kid. Then our fervour gradually dies out. Until a new story comes along and fires up the familiar cycle again.

While showing global empathy and outpouring donations may all be grand gestures at the time, they only stick a band-aid on a soaring issue that affects countless kids everyday.

What we need is to keep track of its development and collectively take proactive actions against all forms of bullying.

Over the past few years, bullying has actually escalated and evolved from the classic playground intimidation or cornering we’re all familiar with to what’s now known as cyberbullying.

What is Cyberbullying or Online Bullying? 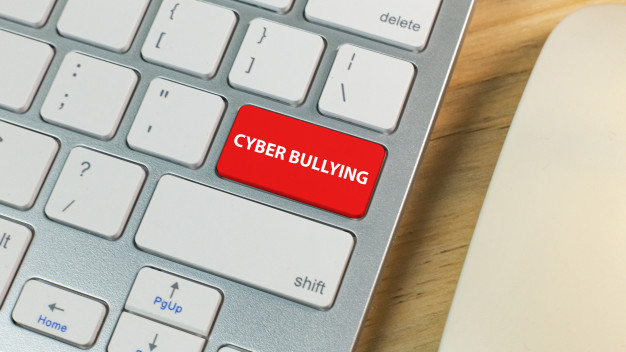 Cyberbullying, online bullying or cyber harassment are all terms that describe the use of technology to taunt, threaten, annoy, or target another person. According to CompariTech, Cyberbullying is on the rise worldwide.

Online anonymity makes bullies more vicious, because they believe they can’t be traced or reprimanded. Which makes cyberbullying one of the most common forms of bullying nowadays.

How Big is the problem?

“Cyberbullies can hide behind a mask of anonymity online and do not need direct physical access to their victims to do unimaginable harm.” —  Inspirational speaker, writer and community leader Anna Maria Chavez.

A 2018 Pew Research study found that a majority of U.S teens (59%) experienced some form of cyberbullying. Whereby, a particularly high 58% expressed criticism of teachers’ efforts to address online harassment and cyberbullying.

Additionally, One in three parents worldwide (33%) report knowing a child who had been cyberbullied, a percentage that’s increasing globally from 2011 according to Ipsos,.

The Effect of Cyberbullying on Kids

Just like face-to-face bullying, cyberbullying can have catastrophic effects, including:

Cyber bullying has effects beyond self-harm as well. A  Javelin Research explains that children who are cyberbullied are 9 times more likely to fall victims of identity fraud .

What Can your School do to Stop Cyberbullying?

As a cybersecurity company, we believe that we too have a part to play. That’s why we carefully curated the following 5 effective steps to help schools address cyberbullying (and bullying) from its roots:

The trickiest thing about cyberbullying is that it’s ‘Hard to Notice’.  Teachers may not overhear it or see it taking place.

According to the Cyberbullying Research Center,  ‘an average of 28% of teens report being cyberbullied’. Yet, there are many others who never even report it.

The good news is that your school can actually monitor and control cyberbullying using the right student monitoring tools like GAT+.

A. GAT Shield for Education: Protect your students by monitoring all browser-based activity. Set up real-time alerting for inappropriate content and cyberbullying keywords in all locations and at all times.

B. GAT+ for Education: Audit, analyze and report on all YouTube channels and videos your students are uploading and creating with the option to delete any unauthorized channel.

You can also disable Hangouts chat whenever you feel that it’s being used as a cyberbullying tool at your school.

Teach Students about Cybersecurity and Being Safe Online

Amanda Tod, a 15 Year-old who fell victim to cyberbullying and eventually took her own life away.

Raising student’s awareness about cybersecurity is imperative at this age, especially when they spend most of their time online.

Cybersecurity awareness sessions yield remarkable results in tackling issues like cyberbullying and online safety. Schools should offer them regularly to tackle major things like how to spot, report and deal with cyberbullying the right way.

These sessions should ideally provide students with a safe space to speak up, share their cyberbullying stories and get help.

Understand why Bullies do it

Most often bullies lose sight of the consequences of their actions. They can’t explain why they do it because they usually don’t think much about it. It’s our job to make them do.

According to anti-bullying speaker, David Flood, helping kids move past outside appearance and empathise with each other on the inside is one of the first steps towards addressing bullying.

Teaching kids about empathy, kindness and inclusion early on can be one of the most effective ways to address bullying and promote a healthier school environment.

That can be incorporated into the curriculum through books, group activities or inviting Anti Bullying speakers (depending on every age and grade).

We’ve been taught that ignoring bullies is the best way to take away their power, and now we tell it to our kids — Yet, we all know it isn’t always easy to do, in the real world or online.

Letting bullied kids know that you, as a school, got their backs is paramount. Ensure that they know that there is help available to them. Somewhere safe they can go to and someone wise they can confide in.

You’d be surprised at the number of times a kid or a teenager is unsuspectingly being bullied by someone they consider a friend.

This, I believe, is one of the most dangerous types of bullying in general. Why? Because the bullied person here thinks their bullier is someone they can trust. Which leaves an even nastier scar on them.

Also, sometimes kids joke or tease others in somewhat vicious ways without realizing that their actions can only be construed as bullying.

Bullying awareness campaigns at schools are vital to any anti-bullying effort at your school. Teaching students to spot when they’re being cyberbullied, exploited, manipulated, etc. or when they’re the ones inflicting it is paramount.

Finally, I will leave you with this inspiring message by Motivational Education Speaker, Jeremy Anderson on inclusion ‘’It’s time to bring around a new culture in schools.’’

Thanks for sharing and spreading the word!
FacebookTwitterRedditLinkedInWhatsAppEmail